Like all Americans, I’m heartbroken by the recent incidents of gun violence that have shaken our country. The statistics are well known: Americans are 20 times more likely to be killed by a gun than people in other developed countries and nearly 12,000 Americans die each year, ripping apart families and communities. But in today’s divisive political climate, gun violence prevention has become all too difficult to achieve. That is why my colleagues and I are honored to partner with former Congresswoman Gabby Giffords and Americans for Responsible Solutions (ARS) in engaging uncommon allies to end gun violence. As a gun owner and a Second Amendment advocate, Gabby knows what it will take to find commonsense solutions to this critical issue.

Early on in my professional career I saw the power of engaging unusual allies to move entrenched political battles.  And that is exactly what Gabby and the ARS team are doing.  Instead of adding to the partisan, political, back-and-forth that has become commonplace in the debate over gun control, ARS is engaging a bipartisan cross-section of business, law enforcement, veteran and civic leaders who support commonsense solutions to gun violence. 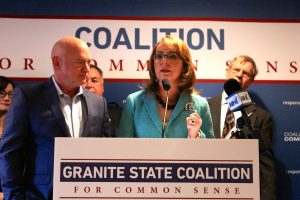 As Gabby poignantly said at the launch, “Stopping gun violence takes courage—the courage to do what’s right, the courage of new ideas. I’ve seen great courage when my life was on the line. Now is the time to come together, to be responsible.”

The movement is growing at the national level too. In October, we helped launch the Women’s Coalition for Common Sense during ARS’s National Domestic Violence Awareness Summit in Washington, D.C.  This effort is also bringing together strange bedfellows.  Their Advisory Committee has already garnered support from bipartisan women, including former Cabinet Secretaries Madeleine Albright and Anne Veneman, former Governors Jennifer Granholm (D) and Christie Todd Whitman (R), and Minneapolis Police Chief Janeè Harteau and actress Connie Britton, all of whom are committed to empowering women to reduce gun violence in their communities.

Over the course of the next few months, the Schrayer team looks forward to helping launch more state coalitions around the country.  Polls show that a supermajority of voters—73 percent—support background checks on all gun sales, including those sold online or at gun shows.  I look forward to helping showcase how Gabby and Americans for Responsible Solutions’ “uncommon allies” are not uncommon at all – sometimes you just need to amplify their voice.

CAN WE TALK?
© Copyright 2022 Schrayer & Associates