Start with the fact that the power of this new Diplomacy Center is that it sits – not on either coast – but as a hub of engagement in the Heartland of America. Too often conversations with the foreign policy community mistakenly skip the center of our country. Yet, University of Michigan was not only smart enough, but also the perfect platform to bring a diverse cadre of seasoned diplomats and foreign policy exports to campus, while creating opportunities for students and faculty to engage on a wide-range of national security and foreign policy topics.  Created with the generous support of former Ambassador to Slovakia Ron Weiser and his wife Eileen, this game-changing Center will build on the Ford’s School top-ranked public policy program, as seen by the extraordinary inaugural line-up. 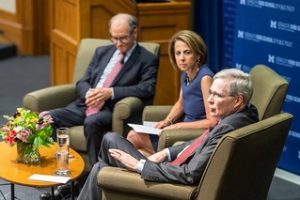 I was honored to join the official launch event , moderating a conversation between two esteemed members of the American diplomatic community, Steve Hadley, former National Security Advisor to President George W. Bush and currently Chair of the U.S. Institute of Peace, and Ambassador Daniel Fried, who has had an extraordinary diplomatic career spanning four decades and multiple Administrations. Our topic, Diplomacy in a New Transatlantic Era, certainly energized the students and community participants with the fast breaking news on Brexit/No Brexit, G7 meetings, NATO, and the upcoming UN General Assembly – not to mention complexities in Afghanistan, Iran, Russia, China, Venezuela and a whole host of topics covered in our two hour discussion.

My favorite part of the day, however, was hearing from the students, the vast majority who raised their hands when I asked who was interested in a career in diplomacy or public service. They wanted to hear from Dan and Steve about the ever-changing role of diplomats and skills required for success. I departed energized and humbled, wondering if perhaps I had met a future National Security Advisor or Secretary of State, without ever knowing it.

Check out some of the programs – North Korea Special Envoy Steve Biegun even made diplomatic news during his September visit, and Secretary Condi Rice and Secretary Hillary Clinton are both in Ann Arbor within the same week. Lucky students to learn first-hand from these top ranked diplomats. #GoDiplomacy and #GoBlue!